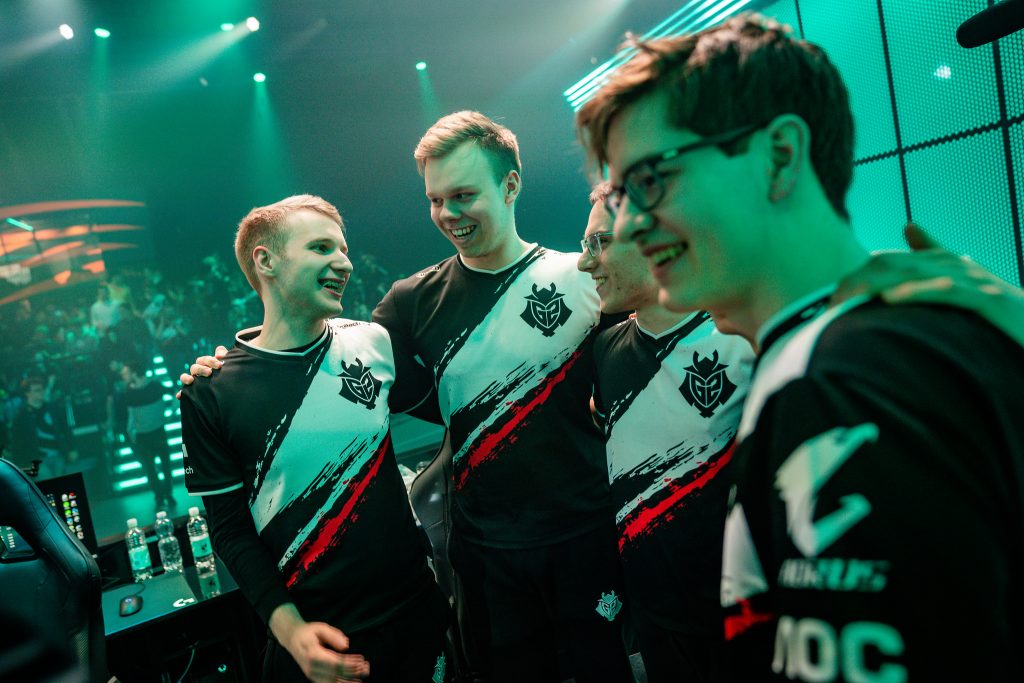 G2 Esports are through the LEC Finals. (Photo courtesy of Riot Games)

The second round of the 2019 LEC Spring Playoffs is in the books. G2 Esports swept Origen 3-0 to advance to the Finals. Fnatic beat Splyce 3-1 and will face Origen for the right to meet G2 in the Finals.

Game One was the most competitive of the series. Origen controlled the pace early, finding early kills through a bot lanedive and securing an infernal drake pre-ten minutes. A second infernal drake gave Origen scaling power to compete with G2 Esports as the game dragged on at Origen’s preferred slow, controlled pace.

An ill-fated Baron attempt by Origen at 31 minutes gave G2 Esports life. An extended fight resulted in G2 winning out with both Rasmus “Caps” Winther and Luka “Perkz” Perković still alive. Their Ryze and Kalista duo were able to trade tank and duo Baron to give G2 the first significant gold lead of the game.

Origen fought back, catching out an overextended G2 Esports for a wipe and transitioning that to Baron. G2 then used Ryze ult to trade mid inhibitor for Elder Drake. Origen pushed into G2’s base with the buffs, but could not seal the deal. G2 capitalized on their second chance.

Game Two was also closely contested for the first 25 minutes. The gold difference was hanging around 1K, and neither team had a big advantage in the late game. Origen started Baron to draw G2 Esports in. The first attempt worked to pick off Mikyx, but the re-engage on Baron didn’t go as well. The rest of G2 collapsed, and Origen were pinned in. Patrik “Patrik” Jírů’s Varus was trapped into tanking Baron by teammate Jonas “Kold” Andersen’s Jarvan IV ult, and Origen were pushed away 4v5. G2 picked up four kills, Baron and a 7k gold lead.

G2 Esports closed the game out three minutes later. Origen could never find an engagement as the poke from Caps’ Swain and Perkz’ Xayah continually forced them back to their fountain. G2 took a 2-0 lead with a 20-kills-to-9 win in 31:30. Caps finished 7/1/11 on Swain.

G2 Esports were on their way to closing out the series 3-0 at 23 minutes into the third game. They won a fight in Origen’s jungle and were able to take the mid inhibitor and both Nexus turrets. But Origen’s death timers were too short, and G2 overstayed. Origen picked up three kills for one and rushed down Baron to stay alive in the series.

That renewed hope for Origen didn’t last long. Though they lost Baron, G2 were able to clean up Origen on their retreat. With an open Nexus, that 5v3 advantage allowed G2 to throw themselves on the Nexus and punch their ticket to the Finals. They won the series clincher 18 kills to 6 in 25 minutes. Returned from his rest, Mihael “Mikyx” Mehle’s Rakan led the team with a 1/1/15 score for 89% kill participation.

G2 Esports top laner Wunder starred against Origen, finishing the series with a combined 19/4/13 K/D/A on Hecarim, Irelia, and Gangplank.

The win by G2 Esports sends them through to the Finals on Sunday, April 14.

Splyce didn’t make it easy, but Fnatic will join Origen in Round Three for a chance to make the LEC Spring Playoff Finals after their 3-1 win over Splyce.

The opener of the series was back-and-forth throughout the first game. Both teams enjoyed advantages at times, but none bigger than a 1.5K gold lead until Fnatic prevailed at the end. Splyce tried to pick off Hylissang’s Alistar at 35 minutes, but all they did was give him a good engage for Fnatic. Their collapse was quick, and Martin “Rekkles” Larsson’s Sivir ran down Splyce. He finished the game 8/1/4 in Fnatic’s 36-minute win.

Splyce made sure to attack Gabriël “Bwipo” Rau’s Cho’Gath in their Game Two win. Splyce lane-swapped their bot and top to throw Fnatic off their game early. Andrei “Xerxe” Dragomir’s Skarner visited top at 3 minutes to dive Bwipo and secure First Blood for Kobbe’s Tristana. Kobbe absolutely took the game over from there, finishing an incredible 14/1/0 in Splyce’s 19-kills-to-10 win in 33 minutes. Xerxe also finished an unblemished 0/0/11.

Fnatic looked like they had locked up Game Three at 27 minutes. They had Baron, were up nine kills and 12K gold, and were hitting the Nexus turrets. But instead of playing it slow, Fnatic dove Splyce’s fountain and were punished. Kasper “Kobbe” Kobberup’s Jinx got value rockets across Fnatic’s team and not only repelled the push but picked up valuable shutdowns. Fnatic took both Nexus turrets but left the door open.

Fnatic tried to rush the Nexus at 28 minutes but Splyce were ready. Marek “Humanoid” Brázda’s Azir put up a turret, and Mads “Broxah” Brock-Pedersen’s Jarvan IV instantly melted. Splyce did enough to stall the game out for another ten minutes.

A big exchange between the teams occurred at 38 minutes. Splyce picked off two members of Fnatic bot lane to stop their push, but the other three Fnatic members secured Baron. Meanwhile, Hylissang made his now signature move of sneakily taking an inhibitor with Baron buff, again leaving an exposed Nexus for Fnatic. They were finally able to take advantage at 40 minutes, ignoring Splyce to walk it in for the game 3 win and match point.

Game Four was even between the teams at 22 minutes. Fnatic started up Baron to try to force Splyce to group up and fight. They split Tamás “Vizicsacsi” Kiss’s Shen from the rest of Splyce, taking him low and forcing Tore “Norkseren” Hoel Eilertsen’s Tahm Kench to gobble him up. But the early chunk put Splyce on the back foot and allowed Fnatic to chase them down. Three kills and a Baron later, Fnatic suddenly had a 3.5k gold lead and control in their closeout game.

Splyce weren’t even allowed to make a final stand as five. Zdravets “Hylissang” Iliev Galabov’s Alistar used his hextech-flash over the wall to lock up Vizicsacsi’s Shen under his turret before the rest of Splyce were in position. With their set-up broken, Splyce were immediately wiped, and Fnatic secured their spot against Origen in the Semifinals. Tim “Nemesis” Lipovšek’s Vayne pocket pick worked out for an 8/2/6 score in the decider.

Fnatic’s ADC Rekkles finished the series with a combined 18/8/21 K/D/A in the four-game series.

Fnatic secured their spot at 2019 Rift Rivals and move on to Round Three to face Origen on Saturday, April 13 in the Semifinals. Splyce will have to wait until the Summer Split before they play again.