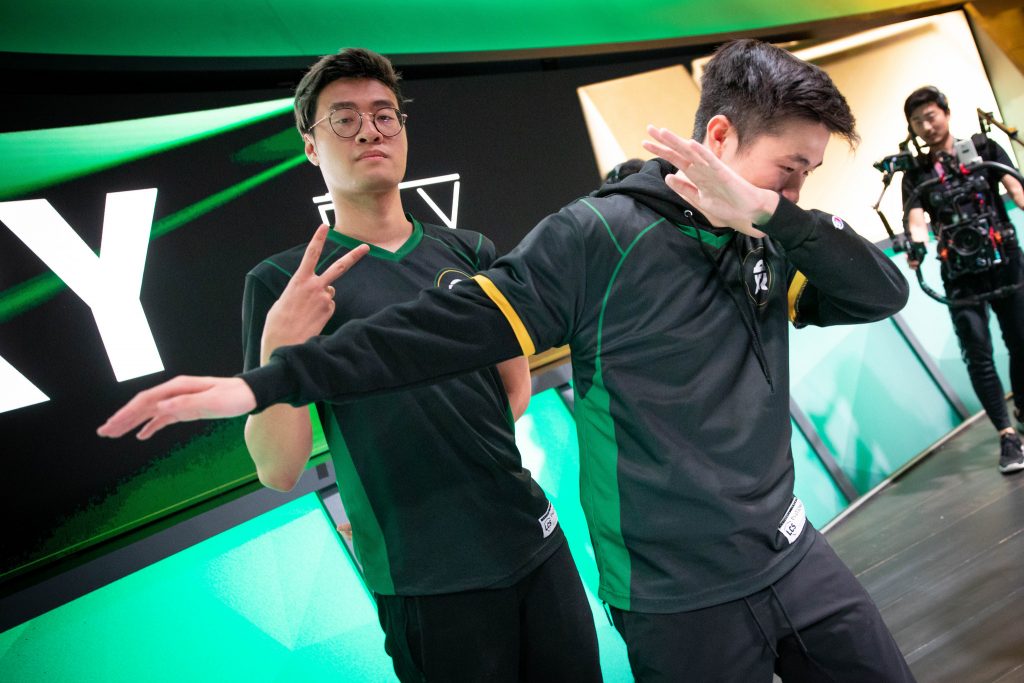 After squeaking out a win in the quarterfinals, FlyQuest will face Team Liquid in the semifinals (Photo courtesy of Riot Games)

The first round of the 2019 LCS Spring Playoffs is complete. FlyQuest held on to beat Golden Guardians 3-2 and will face Team Liquid in the semifinals on April 6. Team SoloMid defeated Echo Fox 3-1 and will face Cloud 9 in the other semifinal matchup on April 7.

The 4 vs 5 matchup in the LCS was as close as their seeding would advertise. In the end, it was the four-seeded FlyQuest who prevailed after climbing back from a 1-2 deficit.

Up 9k gold at 29 minutes in game five, FlyQuest still had work to do. Golden Guardians owned two infernal drakes and Juan “Contractz” Arturo Garcia’s Kindred was scaling. After taking mid inhibitor, they transitioned bot lane where Golden Guardians would put up their last stand.

Henrik “Froggen” Hansen’s Lissandra teleported behind FlyQuest to start the fight. FlyQuest kited back and quickly forced Contractz’s Kindred ult. Rookie top laner Omran “V1per” Shoura hit his Irelia ult on the clumped Golden Guardians team, allowing him to dash around right as it expired. FlyQuest wiped the fight easily, allowing them to push for the win. Eugene “Pobelter” Park’s Zoe finished 6/0/7 in the series-clinching win.

V1per did have some serious misplays earlier in the series but showcased his talent in game five. In an earlier 5v5 fight mid lane, two different 4v1s broke out. Froggen’s Lissandra took on four members of FlyQuest while V1per’s Irelia took on the rest of Golden Guardians.

FlyQuest dispatched of Froggen, but V1per didn’t go down easily. He got Contractz’s Kindred low enough it forced him to ult, allowing V1per to stay alive long enough to flash out. V1per played the role of front-line Irelia incredibly well in the clinching win.

Golden Guardians put FlyQuest on match point after game three. V1per made one of his aforementioned mistakes after the nine-minute cloud drake fight. GGS secured the drake but FlyQuest had taken the fight afterward 2-kills-to-1 to keep the game even.

V1per tried to force the issue and take more. His Jayce flashed after Matthew “Deftly” Chen’s Kalista, who still had his own flash. Kevin “Hauntzer” Yarnell’s Poppy was still lurking in the shadows, not having completed his recall, and V1per was immediately punished. Juan “JayJ” Guibert tried to help, but both died for free to hand GGS the lead.

Golden Guardians forced down all three FlyQuest inhibitors at 32 minutes without contest and secured the win shortly after. Froggen’s Vel’Koz finished a perfect 4/0/7 in the 33-minute game three win.

Up against it in game four, FlyQuest needed a marathon 45-minute win to keep the series going. After losing Baron and Elder drake to Golden Guardians, it looked like FlyQuest had totally thrown away their 6.7k gold lead and would be heading home. GGS used the double buffs to push down mid inhibitor and looked back in control of the game.

But FlyQuest found their winning fight at 44 minutes. V1per’s Ryze flashed the wolves wall to delete Froggen’s Vel’Koz and Deftly’s Kai’Sa to carry the fight. Jason “WildTurtle” Tran’s Varus dealt the damage on the other side of the fight to secure it for FlyQuest. WildTurtle finished game four with a game-high 39.4k damage dealt in the 17-kills-to-13 FLY win.

FlyQuest’s first win of the series was in game two. Pobelter’s Swain was an unkillable terror, finishing 4/0/8 while tanking a team-high 19k damage from Golden Guardians. GGS tried to pick him off at 25 minutes, taking him on 4v1 in his top side jungle. Pobelter activated his ult and used Zhonya’s Hourglass to buy time and allow his team to join him. GGS never got him below half health and FlyQuest won the fight 3-kills-to-1 and took a free Baron. FLY closed out the game in 29 minutes up 14-kills-to-7.

Golden Guardians took First Blood in the series. Hauntzer’s Kennen solo killed V1per’s Aatrox pre-seven minutes, a nerve-y start for the rookie. Golden Guardians won every skirmish and ran away with it, picking up 18 kills while conceding only two in the 29-minute win. Froggen’s signature Karthus went 1/0/14 in the opening win.

WildTurtle finished the series with a combined 15/8/23 K/D/A in the five games.

Team SoloMid controlled Echo Fox after dropping game one, resulting in a 3-1 win and a date with Cloud 9 in the semifinals.

Echo Fox caught Jesper “Zven” Svenningsen’s Lucian out at 40 minutes in game four, seemingly stalling TSM once again. Søren “Bjergsen” Bjerg was having none of that, kiting back on his Zoe and hitting his poke and Sleepy Trouble Bubbles to stay on the offensive. TSM picked up kills on Colin “Solo” Earnest’s Akali and Nickolas “Hakuho” Surgent’s Rakan on the retreat to regain the numbers advantage.

With Baron buff and three inhibitors down, the rest was a formality for TSM. The minions were escorted in and TSM finished the Nexus at 41:35 to advance to the semifinals. TSM led 21-kills-to-11, holding Echo Fox to three turrets.

Echo Fox took a surprising lead in the series with a 37-minute game one win. Though TSM held a 9-kills-to-4 lead, Echo Fox was still up 2k gold at 34 minutes. A three-man squad picked off Sergen “Broken Blade” Çelik’s Jax bot lane, allowing Echo Fox to set up vision around Baron.

That vision and control paid off two minutes later. Matthew “Akaadian” Higginbotham’s Jarvan IV engaged on Echo Fox, but they were ready. Solo’s Aatrox deleted Zven’s Ezreal and Echo Fox crushed the fight 5-kills-to-1. With the death timers and a minion wave pushing mid, Echo Fox could end the game on that push. Kim “Fenix” Jae-hun’s Zoe was a nuisance throughout, dealing 19.2k damage to TSM and finishing 2/1/3.

TSM bounced back in a big way in game two. They racked up 11 kills before Solo’s Cho’Gath ult snagged Echo Fox’s first kill. TSM led all the way, finishing their 32 minute win up 18-kills-to-3. Echo Fox managed only one turret take on the game. The three TSM carries all finished deathless: Broken Blade’s Vladimir (3/0/8), Bjergsen’s Lissandra (2/0/9), and Zven’s Kalista (7/0/7).

TSM took the team fight 5-kills-to-1 and had enough time to push down the Nexus in under 28 minutes. Akaadian set the tone early with some high tempo jungling and finished an impressive 7/2/8 to give TSM match point. Broken Blade’s Hecarim finished with a game high 15.1k damage to champions while absorbing 19.3k damage from Echo Fox.

Often overshadowed by TSM’s solo laners, Zven starred against Echo Fox with a combined 14/2/29 K/D/A in the four games.