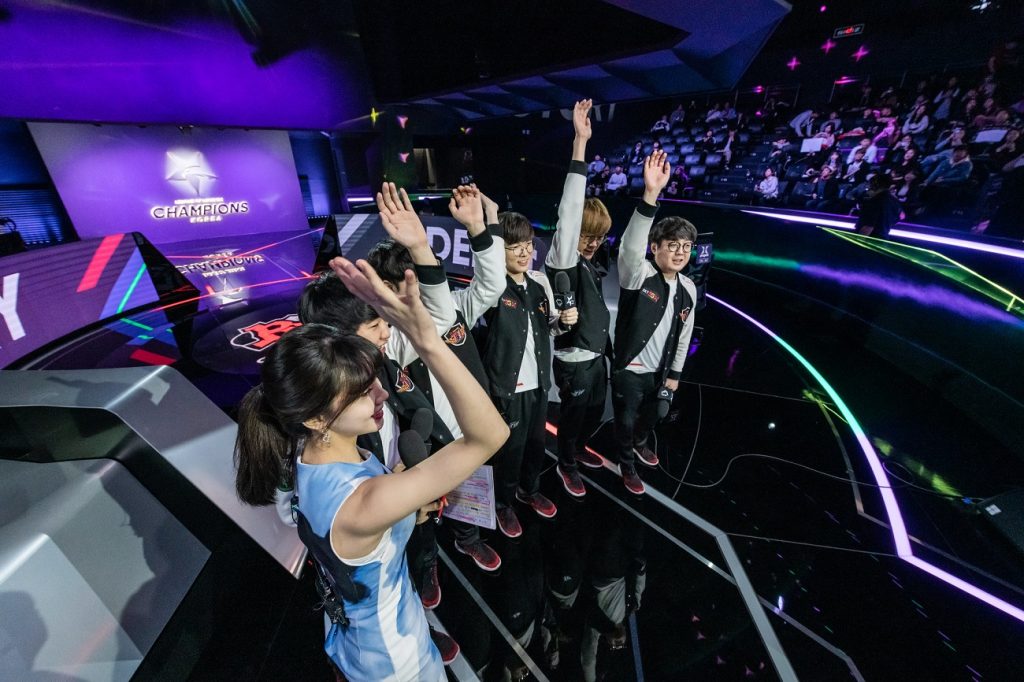 SK Telecom T1 came out on top of all the sweeps in the LCK Spring Playoffs - so far. (Photo courtesy of League of Legends Champions Korea LCK / Flickr)

We’re through the first three rounds of the 2019 LCK Spring Split Playoffs. DAMWON Gaming opened the playoffs with a 2-1 win over SANDBOX Gaming to secure a spot at 2019 Rift Rivals. Kingzone DragonX then swept DAMWON 3-0 before falling 3-0 themselves to SK Telecom T1 in the semifinals. SK Telecom T1 will face Griffin in the finals on April 13 for a championship and the lone spot at MSI on the line.

SK Telecom T1 held the early lead in game one. The two teams converged in the top river at 35 minutes, fighting for vision control around Baron. While it was an even 3-for-3 trade, Kingzone had the higher health and started Baron up at 36 minutes.

Kingzone took it low and seemingly had it secured with Park “TusiN” Jong-ik’s Tahm Kench bringing in Moon “Cuzz” Woo-chan’s Vi, but Park “Teddy” Jin-seong’s Varus had other ideas. He sniped Baron away with a Varus Piercing Arrow to give T1 the buff and a huge momentum swing.

SK Telecom T1 were able to end the game on that Baron push. Kingzone tried to engage on T1 but were punished, losing three kills for two. In addition to stealing Baron, Teddy finished game one with an 11/2/3 score and 23.9K damage dealt to Kingzone. T1 closed game one out while up 22 kills to 16 in 39 minutes.

Things looked more promising for Kingzone in game two. They held a 10-kills-to-4 lead at 34 minutes and were up 8K gold. Kim “Rascal” Kwang-hee’s Ryze picked up a Nexus turret and almost a second by split-pushing bot, but T1 held onto their base. The one thing they had going for them was the scaling advantage Teddy’s Varus had over Kim “Deft” Hyuk-kyu’s Lucian.

That scaling came to fruition at 44 minutes. Teddy melted through Kingzone, allowing them to win the fight and pick up Baron. T1 were able to use that fight win to push to end with such long death timers on Kingzone. Teddy finished 8/1/4 on Varus and Lee “Faker” Sang-hyeok’s 5/4/9 on Sylas was the only other positive K/D ratio for T1.

Game three was the shortest of the series for SK Telecom T1 and Faker’s best performance in the playoffs so far. His Akali ripped Kingzone apart and finished an unblemished 5/0/4 in the series-clinching win. Kim “Khan” Dong-ha played Sylas this game and played him well, finishing 3/0/2 and showing Griffin that T1 can flex him between solo lanes. T1 finished the series with a 15-kills- to- 7 win in 37 minutes.

Teddy starred for SK Telecom T1 in their win, finishing a combined 21/3/12 in the three-game series on Varus and Ezreal.

SK Telecom T1 will advance to face Griffin in the best-of-five finals at Jamsil Indoor Stadium in Seoul, South Korea on Saturday, April 13. Both T1 and Kingzone DragonX have qualified for 2019 Rift Rivals.

Despite their struggles against SK Telecom T1, Kingzone DragonX had no problem sweeping DAMWON Gaming 3-0 in a dominating fashion.

Kingzone DragonX started the series with a smash in game one. Kingzone engaged on Jang “Nuguri” Ha-gwon’s Jayce bot at 18 minutes, picking him off quickly before his team could respond. Unfortunately, Heo “ShowMaker” Su’s teleport came through and brought him to certain death. Sin “Nuclear” Jeong-hyeon and Cho “BeryL” Geon-hee were baited in to try to save their teammates and also died, resulting in a clean five-for-zero ace for Kingzone.

Game one lasted only minutes longer as Kingzone won the game 19-kills-to-2 in just under 28 minutes. Deft’s Ashe would be the only champion to die for Kingzone in the game, but even he finished with a strong score of 10/2/5 while dealing the most damage (19.3) to champions in the game.

Similar to game one, the gold was relatively even in game two until it was blown open around 20 minutes for Kingzone. KZ started up infernal drake and DAMWON collapsed as five to contest. Park “TusiN” Jong-ik’s Pyke picked up two kills with his ultimate, allowing KZ the infernal drake.

They didn’t stop there, moving as five to Baron while DAMWON were still re-spawning. KZ secured Baron before DWG could make it and used Heo “PawN” Won-seok’s Ryze ult to escape unscathed. KZ ran over DWG in fights from there, eventually ending the game up 17 kills to five in 26:30. TusiN’s Pyke finished the second game 8/1/4.

Needing to turn things around in game three, DAMWON Gaming opted to stick with Nuguri and Kim “Canyon” Geon-bu in the lineup. While admirable to stick with them, they produced no better results for the team in game three. Kingzone dominated all the way, picking up triple infernal drakes and rolling to a 30-kills-to-10 victory. Starting in place of Lee “Flame” Ho-jong, Nuguri’s Vladimir finished 2/6/4 in game three to give him 2/14/8 K/D/A in the three-game series.

On the flip side, Kingzone mid laner PawN incredibly went unkilled in the series, finishing a combined 18/0/26 for an infinite KDA.

Kingzone DragonX and DAMWON Gaming’s next action will come at 2019 Rift Rivals after locking down two of the four spots along with SK Telecom T1 and Griffin.

DAMWON Gaming defeated SANDBOX Gaming 2-1 in the closest series of the LCK Spring Playoffs so far.

DAMWON were down 4K gold at 34 minutes in game one, though they had three infernal drakes. By keeping a vision ward on Baron, DAMWON were able to push mid and jump back to fog-of-war undetected. Nuguri’s Ryze immediately ulted the entire team to the Baron pit. DAMWON melted Baron, needing only four seconds to finish the objective.

DAMWON then won the fight at Elder Drake minutes later to gain a six stack buff. That allowed them to easily halt any SANDBOX resistance and end the game on their ensuing push. DAMWON ended the game down 13 kills to 10 but won in the only category that matters: one Nexus to zero.  Heo “ShowMaker” Su’s Corki was deathless, finishing 4/0/5.

SANDBOX pushed the series to three games by winning game two. They pushed down the top inhibitor turret and killed Cho “BeryL” Geon-hee’s Nautilus before Jang “Nurguri” Ha-gwon teleported in, giving them a numbers advantage. Nuguri melted on his entrance and SANDBOX eventually won the 4v3 to seal game 2. Jang “Ghost” Yong-jun’s Kalista carried the final fight and finished 8/3/7 in SANDBOX’s 30-minute win.

DAMWON Gaming held a near 2K gold lead at 18 minutes in game three, but the bulk of that was from their turret take, so the game was still close. Starting Jang “Nurguri” Ha-gwon and Kim “Canyon” Geon-bu gave DAMWON the mechanical edge, but could have left them lacking in shot-calling direction in the pivotal game three. So it was a pleasant surprise when Nuguri was in the middle of the series-winning play for DAMWON Gaming.

SANDBOX Gaming brought four members bot to try to finish DAMWON’s outer turret. Instead of trying to trade turrets mid, DAMWON engaged. Sin “Nuclear” Jeong-hyeon’s Ashe Arrow was true, and the collapse was on. But the big play was Nuguri’s perfect teleport flank on Ryze. He beat Park “Summit” Woo-tae’s Neeko to the fight by eight seconds, more than enough time for DAMWON to rip apart SANDBOX. DAMWON took the fight four kills to zero to open a huge lead.

SANDBOX put up their final stand at 27 minutes by engaging on Nuclear. A quick Quicksilver Sash and save from BeryL’s Tahm Kench allowed DAMWON to turn the fight around. They killed two in the 4v4 while Nuguri continued to push bot lane. With a 5v3 advantage, DAMWON closed it out seconds later to advance to round 2. ShowMaker’s Corki finished the final game 7/0/5 in the 28-minute win.

Mid laner ShowMaker finished the series with a combined 15/3/15 K/D/A in the DAMWON series win.

With the win, DAMWON Gaming qualified for the final 2019 Rift Rivals spot in the LCK. SANDBOX Gaming will be on vacation until the start of the LCK Summer Split.