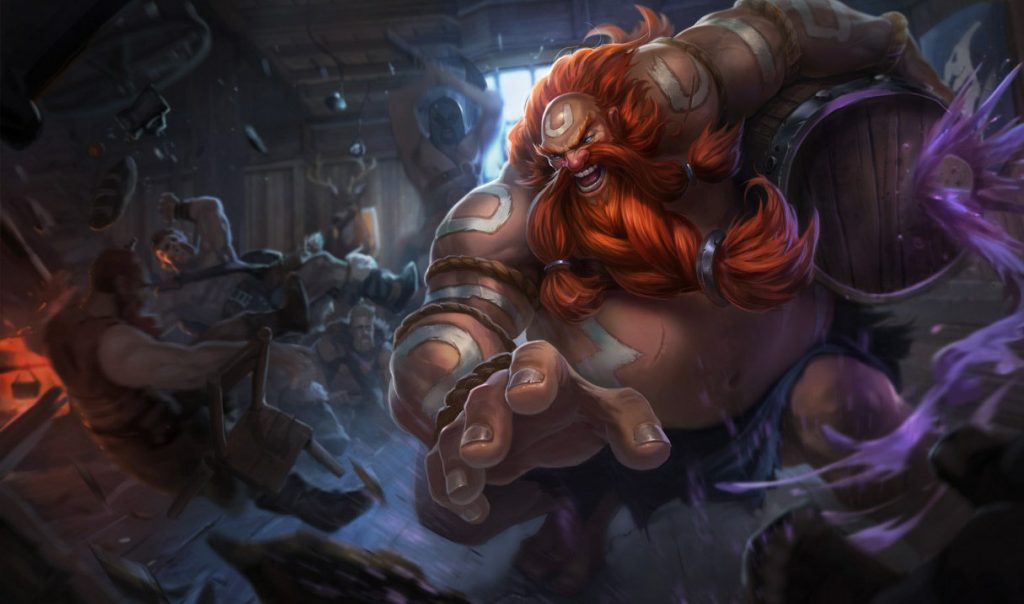 Gragas remains one of the most popular champions for the jungle in Patch 8.19.

The 2018 League of Legends World Championship is upon us. If you haven’t been following closely or are new to the game, here is a quick rundown on the current meta and everything you need to know about it to follow along.

Worlds 2018 is being played on Patch 8.19. The major changes to affect pro play are buffs to Darius and Fiora. Darius had his base damage on his W – Crippling Strike increased, but the big change was increasing his armor penetration on his E – Apprehend. Fiora got small buffs to her healing from her vital procs.

While neither of these changes warrants their play over Urgot and Aatrox, it’s important to note that Darius and Fiora are both anti-tank champions. These changes are clearly aimed at reducing the number of tank versus tank matchups in the top lane, or at the very least giving teams a viable way to opt out of those matchups and replace them with carry oriented options.

Thresh also got a notable buff on his Q – Death Sentence. The mana cost and early cooldown were decreased, opening the champion up for more carry oriented support players. It has been tough for Thresh to find play against the tank supports in the meta, but this buff is a step in the right direction

Both of these champions were 100% pick/ban in the 42 Play-in games. Expect to see them picked whenever left up and for it to be a common matchup in top lane. Tanks like Ornn and Sion will also be popular. Teams with carry oriented top laners could pick Darius or Fiora into those tank matchups, as mentioned earlier.

Gragas and Olaf are great at fighting early and are generally pretty safe at getting vision around the map, a big priority for pro games. Skarner power farms well – with guaranteed ganks at level 6 in a lane with crowd control – and forces the enemy team to buy a Quicksilver Sash. Carry oriented junglers will gravitate toward Nocturne and Camille. Both can shut down low mobility carries later in the game.

Akali is the highest priority mid laner for her damage and play-making but can be countered when taken early by tanks and a pick like Zilean. Both Akali and Ryze can be flexed into the top lane based on matchups, giving good flexibility when early picked. Leblanc has a great roaming presence, ideal for pro play. Irelia can be used as a counter pick mid against some mages and on teams in need of physical damage. Galio will see play against heavy assassin teams and on teams that like to make plays around the map.

Kai’Sa is the high skill cap, high reward champion that struggles early in lane but scales well. She also has an early item power spike. Varus has great range to punish other bot laners and has an engage ultimate that’s very powerful in pro play. Lucian is a lane bully that teams can use if they want to be strong in the early to mid game. Heimerdinger is a must-ban against players like Hjarnan that can play it well, but not many players can force that ban.

In a non-ranged support meta, Alistar has everything you need from a support: engage, high crowd control, and an ultimate to make him tanky without items. Rakan is the best engage support and will be prized for his ability to start fights from a screen away. Tahm Kench is fantastic at disengaging and saving a carry. He is especially important against assassins like Akali and high burst mages like Syndra and Ryze. Braum will see play when the higher priority supports get banned. Thresh is available for playmaking supports, as mentioned earlier.

The timing of these drakes influences the importance of getting them. Ocean is incredibly strong early as it helps laners and the jungler sustain, but falls off later in the game. Infernal is weak early but scales well and is generally regarded as the most prized drake. Mountain is a solid take for teams that are ahead or will have a split-push set up later in the game. Cloud drake is the least prioritized and is often left to whoever wants to spend their time to pick it up.

This will be contested whenever it comes up in games. By the point in the game that it spawns, teams have damage to kill it and one team will likely have enough elemental drake stacks to make the buff very powerful. It can often end up traded for Baron if the spawn timers line up.

Baron gives gold and champion stats but is most valued for the buff it gives to minions. It is almost required for sieging towers and makes split-push even more potent. Many games will be won or lost around this objective

Once an afterthought, Rift Herald is now prized enough to fight over. Getting a charge off is almost always a guaranteed tower. Rift Herald also forces the enemy team to respond to that location and gains the team who dropped Rift Herald tempo in map movement and establishing vision. Rift Herald is often traded for an early elemental drake or when an enemy team dives bot lane for tower first blood.

The current meta is very early to mid game focused. Nerves will play a role in the match lengths, as players tend to play more passively in such high stakes games. But in this meta, games are snowballing early and do not last to the late stages you would have seen in earlier seasons. Teams that concede too much of the map early find a hard time stalling out games if they cannot successfully fend off an enemy Baron take. Of the 42 Play-in games, the longest only lasted 43:31 minutes. The fastest game of the Play-in Stage was 21:55 minutes.