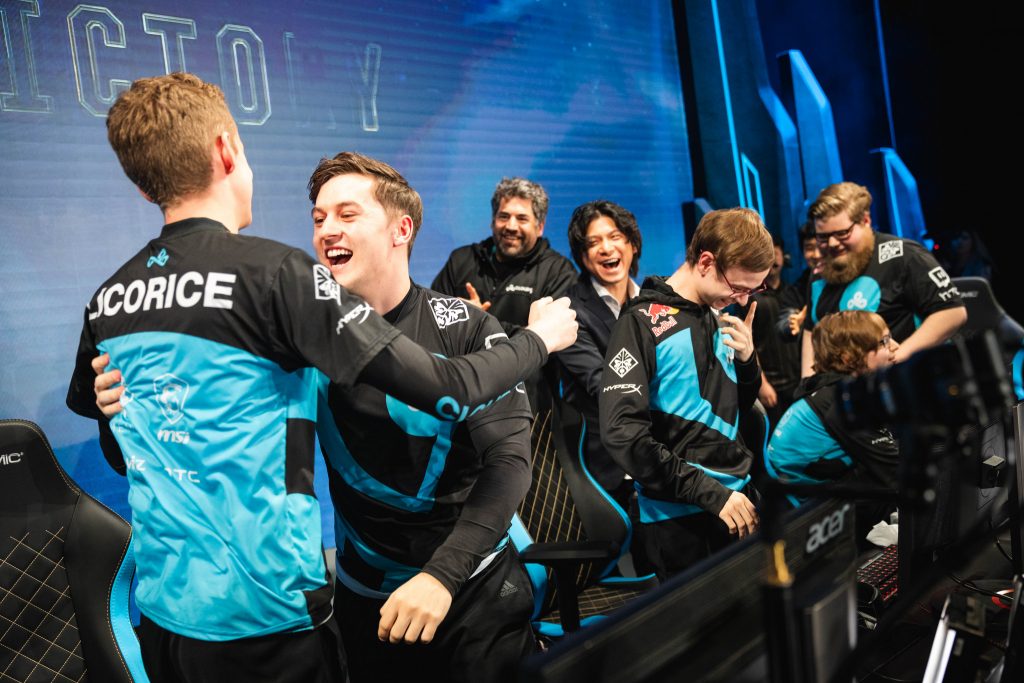 Cloud9 went on a miracle run to fight their way into the knockout stage.

Day 5 action is complete and was full of surprises and wild upsets. Here’s what happened and what we learned about the teams today.

Cloud 9 Makes a Miracle Run Out of Group B

Cloud 9 swept the back half of the Group Stage 3-0 before ultimately falling to Royal Never Give Up in the 1st place tiebreaker.

Gen.G v Cloud 9: This was the breakout game for Jensen at Worlds 2018. Finally, on a playmaker in Leblanc, Jensen responded with a solo kill on Crown’s Syndra pre-3 minutes. Cloud 9 then picked on Crown repeatedly with Svenskeren’s Nocturne throughout laning phase, culminating in a 0/6/2 final K/D/A by Crown and a C9 win.

Cloud 9 v Royal Never Give Up: Cloud 9 simply came out on top in the early skirmishes and never trailed in this game. Licorice’s Shen and Zeyzal’s Alistar were instrumental in locking down Uzi’s Kai’Sa and RNG were never the stronger side in team fights. C9 led 13 kills to 4 in the 30-minute win.

Cloud 9 v Team Vitality: This was the pivotal game of Group B as the winner advanced to quarterfinals, while the loser needed Gen.G to upset RNG to make tiebreakers. The game was even at 26 minutes when Team Vitality came away with a 2-0 team fight win. After an extended bait around Baron, Cloud 9 came up huge in not only stopping Vitality but getting enough kills to take Baron themselves. From there, Vitality could not win a team fight against C9’s gold lead and Jensen’s Zilean. C9 punched their ticket to quarterfinals in 33 minutes.

RNG Stumble but Regroup to Make it out in 1st

Royal Never Give Up quickly went from undefeated in the group to needing a win over Gen.G in the final game to avoid a potential exit from Worlds 2018.

Royal Never Give Up v Gen.G: Needing a win to assure passage to the quarterfinals, Royal Never Give Up found their form in the last game of Group B. Mlxg was substituted in for Karsa and was aggressive early, something that had been missing for RNG earlier in the day. RNG crushed the game on the back of his 8/2/6 performance and re-established momentum heading into the 1st place tiebreaker with C9.

Royal Never Give Up v Cloud 9 (Tiebreaker): Continuing from what they showed against Gen.G, Royal Never Give Up played Mlxg and put Uzi on Lucian for more early game power. Cloud 9 fought valiantly and kept the game close until 38 minutes. C9 started Baron while RNG had 5 alive and RNG punished them with a 5 kill to 1 fight win off the back of an Uzi triple kill to leave Group B in 1st place.

It was an incredibly disappointing day for both Gen.G and Team Vitality. Defending World Champions Gen.G were heavy favorites in Group B along with Royal Never Give Up, but they were Team Never Showed Up on Day 5. Team Vitality took down the Chinese and Korean heavyweights with such exciting aggression, but could not figure out how to beat Cloud 9 to advance.

Team Vitality v Gen.G: Kikis visited top at 8:30 into the game to dive CuVee’s Irelia for Team Vitality’s First Blood. Cabochard’s Urgot was then able to abuse CuVee top, creating a huge pressure point for Vitality on the map all game long. Gen.G could defend against the playmaking of Vitality and the European squad led 12 kills to 6 in their 35-minute win.