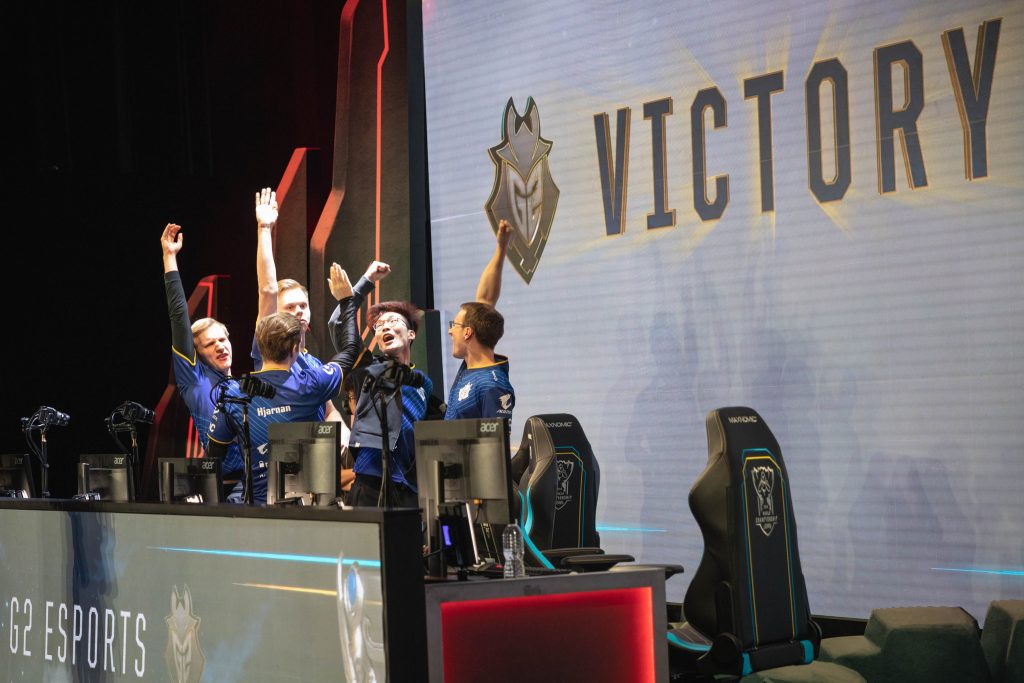 Day 4 is finished and with it, we are halfway home in the Worlds 2018 Group Stage. Here’s what happened and what we learned about the teams today.

The range of outcomes for this G2 squad only gets wider as they beat previously undefeated Flash Wolves to tie for first place in Group A. Afreeca Freecs finally get on the board against Phong Vu Buffalo.

G2 Esports (2-1) v Flash Wolves (2-1): Despite conceding the first two kills of the game, G2 took an early gold lead off lane prowess. Both solo lanes were up 20 CS by 15 minutes and Wunder’s Camille got away with running Kleptomancy against Hanabi’s Sion. As lane phase broke, Flash Wolves could not deal with the G2 split-push. It culminated in Wunder taking FW’s base while G2 did Baron for a 31-minute win.

Afreeca Freecs (1-2) v Phong Vu Buffalo (1-2): Phong Vu Buffalo tried to attack Kiin’s Irelia early. That turned out to be a mistake. Mowgli’s Olaf was there for a counter-gank in both instances to turn the fights around 2-for-1 for Afreeca Freecs and those would end up being the only two deaths AF conceded all game. AF cleanly closed the game out 12 kills to 2 in 26:27.

Top Western Seeds Find their Wins Over the LMS

It was a disappointing 0-3 day for the LMS, though it was not unexpected after Flash Wolves lost. Fnatic maintained their hopes for 1st in Group D while Team Liquid clung to life in Group C.

G-Rex (0-3) v Fnatic (2-1): sOAZ had looked like one of, if not the best top laner in the world after the first two games, so it seemed controversial to bring in Bwipo against G-Rex. Bwipo erased that doubt by out-playing a 1v2 dive to give Caps’ Ryze First Blood and turned a bot lane gank against Fnatic with Teleport, all before the first 5 minutes of the game. Fnatic capped their win by 5 man diving the G-Rex Nexus with Ryze ult for an ace before 24 minutes.

Team Liquid (1-2) v MAD Team (0-3): MAD Team played Team Liquid closely for the first 15 minutes. MAD then grouped 4 bot to try to take tower First Blood, but TL had other ideas. Olleh’s Alistar had a 3 man Headbutt-Pulverize combo and Impact’s Shen followed with a 3 man taunt to give TL 3 kills and sudden control of the game. TL never conceded a turret en route to a decisive win.

Invictus Gaming and KT Rolster joined Royal Never Give Up as the three teams to sweep their first set of round robin matches.

Invictus Gaming (3-0) v 100 Thieves (1-2): 100 Thieves got off to a massive start by winning a 3v3 fight pre-2:30 on the top side of the map. Unfortunately for 100T, their bot lane could not handle the constant pressure from Ning’s Camille and Invictus Gaming never gave them room to breathe. IG absolutely dominated despite the early hiccup and closed the game out in 20:26 for the fastest game so far at Worlds 2018.

KT Rolster (3-0) v Edward Gaming (2-1): The LPL had been 8-0 so far and Edward Gaming had looked strong in their first 2 games in Group C. None of that mattered to KT Rolster as they dismantled EDG to continue their dominance in Group Stage. Mata’s Alistar put on a clinic in bot lane and EDG never found a counter-play to KT’s unrelenting aggression. Ucal found a 4 man Galio taunt under the double Nexus towers to cement the win for KT in 34:21.