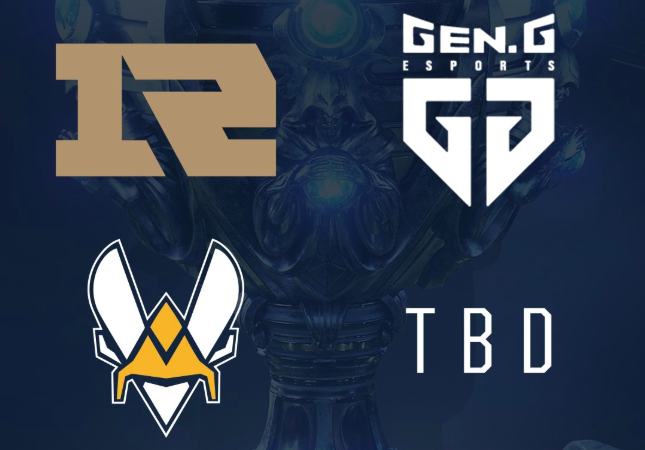 Once again, Royal Never Give Up and Gen.G end up in the same group - as their seemingly endless rivalry continues.

The 2018 League of Legends World Championship is fast approaching and it’s time to preview the teams that will be fighting it out in the group stage starting October 10th. Today we take a look at Group B. This page will be updated with the final play-in team after the play-in stage is complete.

Some players are so good on ADC that they didn’t bother to mess around with Mage or Bruiser bot laners when they hit peak popularity. Uzi is one of those players. After missing a month to focus on healing up from injury, Uzi regained his form at the end of Summer Split and had a stellar playoff run. Over the ten playoff games, he compiled a 7.88 KDA with an impressive 5.7 kills per game. Hopefully, teams will leave Kai’Sa open so we can see his mechanics on display on the Worlds stage.

China has come into World Championships in the past with hype, but nothing approaching the excitement for Royal Never Give Up in 2018. The roster is complete with talent, experience, and cohesion. Royal Never Give Up won the 2018 Mid-Season Invitational and helped the LPL win Rift Rivals 2018. They have Chinese fans hoping this is the year China wins their first World Championship.

It was a lackluster year for Gen.G after winning the 2017 World Championship. Playing under KSV eSports in the LCK 2018 Spring Split, the team went 9-9 in the regular season and finished 5th in the playoffs. They changed organizations again to Gen.G for Summer Split and improved to 13-5 in the regular season but again finished 5th in the playoffs. It took a full run of the gauntlet for Gen.G to make it to Worlds as Korea’s third seed. They defeated SK Telecom T1 3-2, Griffin 3-2, and finally Kingzone DragonX 3-0 to win the Korea Regional Finals 2018.

The biggest star power at ADC may fall to Uzi and Deft, but Ruler is a standout in his own right. Like Uzi, he can carry a game if you let him scale and Gen.G plays around that very well. Surprisingly, Ruler has not had a lot of success on Kai’Sa, who will be a very popular pick this event. Gen.G had a record of 1-5 when Ruler played her and he had by far his lowest KDA on the champion. It will be interesting to see if Gen.G allows teams to play Kai’Sa against them or if they remove it from the champion pool entirely in the ban phase.

Scaling is the name of the game for Gen.G. They almost never draft an early game focused team composition and will gracefully concede objectives until they have their core items. This is a double-edged sword when it comes to a tournament like this. A lot of teams get nervous on the largest stage and play more passively than usual, giving Gen.G an advantage in reaching their prodigious late game. On the other hand, Gen.G are vulnerable to being upset by a weaker team that is able to exploit their passivity in the early game. Afreeca Freecs did this beautifully in the LCK 2018 Summer Playoffs, but not every team will have their individual laning talent.

The important thing to remember is that just because Gen.G is down early in gold does not mean they are truly losing. If they are down gold at 15 minutes, look to see if that gold gap is shrinking or widening as the game goes on. Chances are that if a team can’t keep that gold difference growing, they won’t be able to close out Gen.G.

Team Vitality had respectable finishes in both splits of 2018 to earn the second seed from the EU LCS. They finished 10-8 in the Spring Split regular season for 4th place and also took 4th in the Spring Playoffs. Team Vitality improved to 12-6 for a 2nd place regular season finish in Summer Split before finishing 3rd in the Summer Playoffs. Fnatic’s win over FC Schalke 04 in the Summer Finals clinched Team Vitality’s spot in the 2018 League of Legends World Championship.

Prior to the arrival of Kikis to the starting lineup, Team Vitality was a mediocre 5-5 in the Summer Split and was falling out of contention in the EU LCS. Once he was inserted into the lineup, Team Vitality caught fire and finished the regular season 7-1 and went on to win both tiebreaker games to finish the split in second place. Kikis brought an aggressive and proactive playstyle to the team and it was clear that the team looked like a more cohesive unit. Look for Kikis to be involved in lanes early and often for Team Vitality to give his young teammates confidence.

Nobody will pick Team Vitality to make it out of this group. They will not be able to stand toe-to-toe with either Royal Never Give Up or Gen.G in late game team fights. However, if there was any kind of weakness to exploit against the two heavy favorites, it would be the early game. Team Vitality has shown a knack for early proactive play with Kikis and it would serve them well to look for it here, especially in this group.

As good as they are in lane, Uzi and Ruler do not play many lane bullies and there are champions you can pick into these lanes to punish them. Ambition does not like to contest players in the jungle and sticks to his own side of the map. Team Vitality will have their opportunities to make plays early. Look for them to draft strong matchups for Jiizuke or get him champions like Taliyah and Galio that can help give Kikis mid lane priority to make plays.

It was an up and down year for Cloud 9. They ultimately qualified for the Worlds 2018 Main Event by edging Gambit Esports 3-2 in the Play-in Knockouts after Cloud 9 had gone 4-0 in the Group Stage. A lackluster Spring Split saw Cloud 9 go 11-7 in the regular season and finish 5/6th in the playoffs. They then rebounded from a poor start in the Summer Split to again finish 11-7 in the regular season but made it to the Summer Finals before losing to Team Liquid.

Like most of Cloud 9, Jensen had a weird 2018 season. He was benched for part of the Summer Split before eventually returning and splitting time with Goldenglue. He will get all the starts at Worlds 2018 presumably because Cloud 9 was limited to a 6 man roster and chose to bring Svenskeren instead of Goldenglue. Laning and mechanics have never been an issue for Jensen, but he will have to continue to rebuild his synergy with Svenskeren after spending most of his time with Blaber in Summer. Jensen had a very poor performance in the Play-in stage, but that was explained away by his being sick. Hopefully, that is behind him and he can show his best form in the Main Event.

Cloud 9 will need to pressure around the top side of the map to have any chance of making it out of the Group of Death. Gen.G and Royal Never Give Up have some of the best bot lanes in the world while Sneaky and Zeyzal have been solid but unspectacular in the laning phase. It would be a poor bet to sink resources into Cloud 9’s bot lane, instead of letting them go even or lose lane gracefully.

Jensen and Licorice both struggled for their standards in the Play-in stages. But now is not the time to abandon playing around them. They are immensely talented and both have shown the capability to take over games. Whether Blaber or Svenskeren plays, they should be focusing on the top half of the map to give Jensen and Licorice the ability to play aggressively in lane. Obviously, this is also pick and team composition dependent, but Cloud 9 can attack the top side against their Group B opponents. Look for them to draft Licorice one of Urgot or Aatrox when up and try to give Jensen the counter-pick mid whenever available.