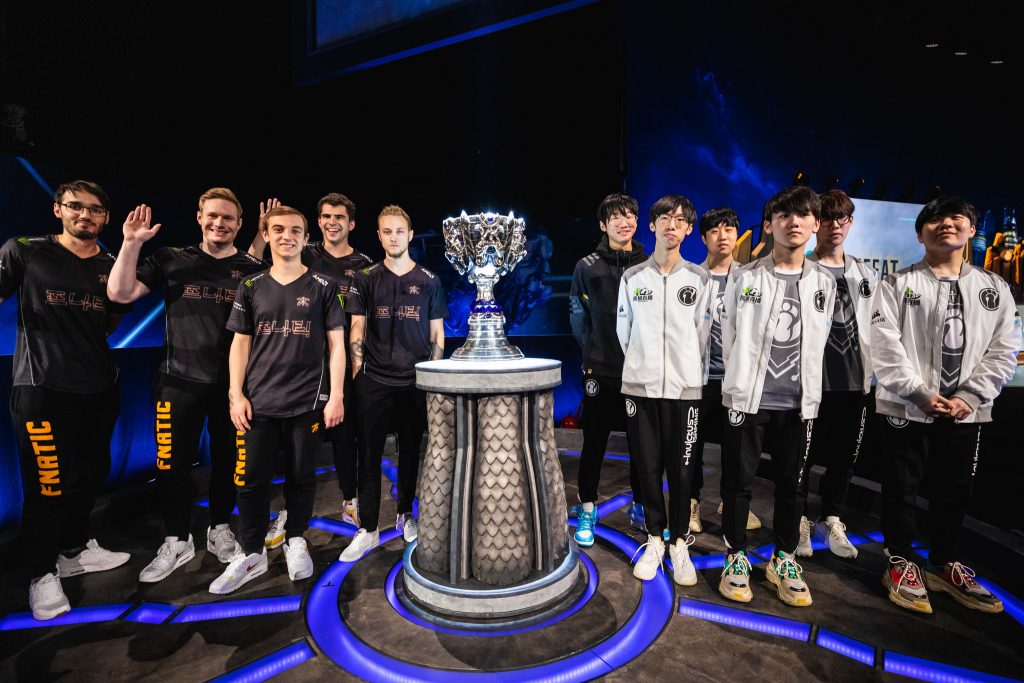 Will Fnatic be able to bring the Summoner's Cup to the West or will Invictus Gaming ensure Asia's dominance. (Photo courtesy of Riot Games)

Fnatic and Invictus Gaming are the last two teams standing in the 2018 League of Legends World Championship. Will IG get their revenge, or will Fnatic win the ultimate prize for the west? We preview the coming match with a look back at Semifinals performance, win conditions for each team, and a final prediction.

Fnatic destroyed Cloud 9 in the semifinals 3-0 to advance to the finals. They were able to neutralize the early game of C9 enough that their more well-rounded team play was on display. Caps had a sensational performance in the series and outclassed Jensen in mid lane. Bwipo also had a great series and was rewarded by playing all 3 games over sOAZ.

Invictus Gaming had an easy 3-0 win in semifinals as well. G2 Esports had no answers for TheShy and Rookie in lane. Jayce was an especially important pick for IG, as they showed the ability to flex him between TheShy and Rookie. Ning and JackeyLove were target banned in the series, but both were able to put on performances on secondary champions. TheShy started all 3 games over Duke top lane.

Rekkles has his best series to date. So much hype — and deservedly so — has been going to his teammates Caps and Broxah, but Rekkles is the original Fnatic carry. In the two games that Fnatic beat IG, Rekkles was a difference maker. His Tristana found solo kills on JackeyLove’s Kai’Sa in their second matchup and his Ezreal had the most gold in the game by a comfortable margin in game 3. Rekkles can win lane and be counted on to have the superior positioning in team fights for Fnatic.

In order to get Rekkles in a position to carry, Broxah must again abuse Ning in the jungle. All 3 matchups in the Group Stage ended up going to the team that successfully got bot lane rolling early. Fnatic took advantage of Ning’s shallow pool to target ban him in Group Stage, but he has shown the ability to play more champions in the weeks since. Broxah won’t be able to rely on getting Ning out of his comfort zone. Rather, he must keep up his usual aggression under the bright lights of the Worlds Finals stage.

It sounds like a broken record, but it’s true in every match IG plays: Rookie must carry. Nobody is saying that Rookie is Faker, but the way his movements across the map feel like they have a gravitational pull is Faker-like in style. Rookie fell victim to over-aggression in game 2 against Fnatic in the Group Stage, but his game 3 dominance of Caps was largely forgotten because Fnatic ended up winning the game. Caps has been the second best mid at Worlds, but mid lane is the biggest matchup advantage IG has in the series and Rookie must show it in this series.

IG must also have a plan to win top lane. It won’t be enough to hope Rookie wins lane and play around him. TheShy had an incredible performance in the semifinals against Wunder to step up and he’ll need another one here. If IG drops a game, they might consider turning to Duke to change the momentum, but that would be a mistake. IG had KT Rolster on the ropes before giving away game 3 and subbing in Duke for game 4. TheShy has proven himself at Worlds and should be given every opportunity to be the second carry for IG. If he can shut down a second hyped European top laner in as many weeks, IG will win the World Championship.

In a breakdown of lane-by-lane matchups:

Fnatic has the overall team strength advantage. Rookie is the best player in the series, but Fnatic boast a more well-rounded team. Caps and Broxah do enough to neutralize Rookie and bring home the title to the west.