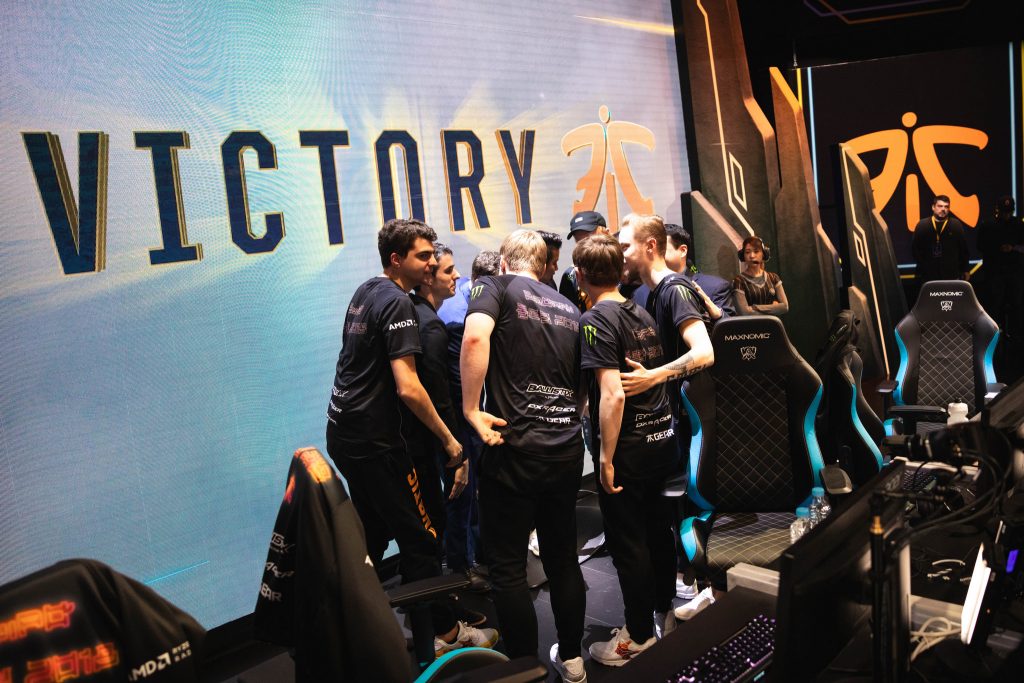 Fnatic swept Cloud 9 in 2018 League of Legends World Championship semifinals and will face IG in the Finals.

Fnatic dominated Cloud 9 with a 3 games to 0 sweep to advance to the 2018 League of Legends World Championship Finals. Fnatic will meet Invictus Gaming in a Group D rematch on November 3rd.

Fnatic had found themselves in the unfamiliar position of being down gold past 20 minutes in game 3 of the series. Cloud 9 had just sent a 3 man squad bot to kill Bwipo’s Viktor and Fnatic were unable to make any moves on the map as it happened. It looked like C9 were finally finding their footing in the series.

Then at 24:45, Fnatic found their opening. Licorice’s Ekko took a lazy recall and was caught by Caps’ Aatrox. Bwipo teleported behind Licorice to keep him locked down and Fnatic had made their pick. Now caught in the middle of a 5 man squad, C9 chose to try to fight their way out of it. C9 burned Aatrox’s revive instantly, but the crowd control combination from Viktor’s Gravity Field and Hylissang’s Rakan was deadly from Fnatic.

Fnatic picked up 3 more kills, grabbed Infernal drake, and finished up with Baron. They turned a 2k gold deficit into a 2k gold lead in a matter of seconds and finally took control of game 3. C9 put up a fight for their tournament lives, but Fnatic never relinquished their lead. They ended the series at 35 minutes, acing C9 in their last stand at their Nexus.

Cloud 9 threw a curveball in their game 2 draft by flexing Viktor to Sneaky bot lane. The pick gave C9 early priority in bot lane, but Fnatic’s bot lane withstood the pressure and were never dove or forced off tower. The longer the game stayed nearly even, the better for Fnatic’s scaling on Caps’ Azir and Rekkles’ Sivir.

That scaling culminated in the final team fight win of game 2 for Fnatic. C9 killed Broxah and Hylissang near their base at 32 minutes, losing only Licorice in response. They then attempted to chase down Caps, but Caps had other ideas. He used a perfect Emperor’s Divide to turnaround onto C9 and melted them for a quadrakill and the ace. Fnatic ended the game within the minute, sporting a 13 kills to 9 win.

Fnatic absolutely crushed C9 in the opening game of the series. Caps and Broxah combined to pick up First Blood on Jensen mid, despite Svenskeren having the early pressure around mid lane. Svenskeren then tried to force a kill on Bwipo’s Viktor, only to get kited to his death under Fnatic’s tower. In a supposed counterpick matchup, Licorice’s Ekko died solo and was bullied hard by Bwipo in lane.

C9 attempted a desperation play at 13:40 by having Jensen teleport bot behind Fnatic’s bot lane. While they picked up one of their only kills in the game, the play was not a success. All 3 C9 members were killed for only the death of Rekkles’ Sivir and Fnatic continued their snowball. Fnatic mercifully ended the game just after 25 minutes, leading 20 kills to 3. Fnatic did not concede a single objective in game 1.

Caps outclassed Jensen in the entirety of the series regardless of the picks and lane matchups. He finished the series with a combined 18/7/22 K/D/A.