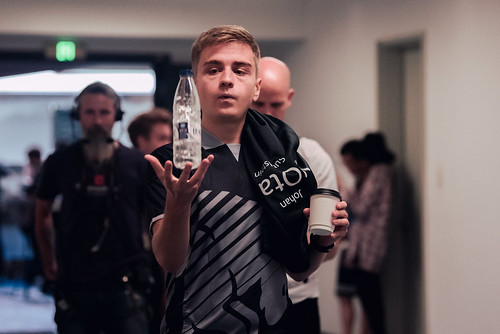 OG breezed their way into contention at the Major after a nearly flawless run through the Open and Closed qualifier. (Photo courtesy Valve)

We’re very much in the heart of the 2019-2020 Dota Pro Circuit season, and the ESL One Los Angeles 2020 Qualifiers have just wrapped up. In one of the most hectic series of qualifications in recent memory, we’ve seen top teams fall to Minors, and surprising returns to form in a tournament cycle for the ages.

While the natural top of most headlines has to be the return OG to the DPC, it’s not the only piece of news that’s attracted a lot of interest. Southeast Asia has seen some of its top teams fall from contention. In contrast, South American almost saw itself locked in an infinite tiebreaker, as an almost unheard of team took the top spot.

But twists and turns aside, only 16 teams can head to ESL One Los Angeles, and after several days of games, we know 15 of those squads.

This tournament’s Europe Qualifier was one of the most stacked Dota 2 qualification brackets of all time. With Team Secret, Alliance, Team Liquid, Nigma, Ninjas in Pyjamas, Team Singularity, Vikin.gg, and Aggressive Mode, all automatically invited to the Open Qualifier, there was already a considerable amount of competition. But with OG and OG Seed both surviving the Closed Qualifier, we instantly had a dangerous situation.

Naturally, with all this talent in one place, it was inevitable we’d be missing at least a few of the top teams in international Dota 2 competition from the next Major. This unsurprisingly, and deservedly, drew the ire of plenty of analysts and fans. And as the team’s clashed, it was clear we’d miss out on at least one of Europe’s golden boys.

Sadly it would be Alliance, Team Liquid, Aggressive Mode, and, most surprisingly, Nigma who fell to the Minor qualifiers. A trip to the ESL One Los Angeles isn’t entirely off the cards yet, as one of these squads could still run the gauntlet and win the StarLadder ImbaTV Dota 2 Minor Season 3. But as only one of these teams can qualify for the event, we’re going to be saying goodbye to at least three of them.

OG, on the other hand, made things look simple. After stomping their way through the Open Qualifier, with their efforts broadcast by new streaming partner Janne “Gorgc” Stefanovski, the team showed no mercy to their top-tier opponents. The recently revealed roster seemed flawless in the face of their Closed Qualifier competition, picking up win after win on their way to the Major.

Our ticket to the #ESLOne Los Angeles Major is now secured!

Our newly bloomed team will start its Race to The International 2020 next month! See you there!#DreamOG pic.twitter.com/DFE0tk9d8f

In one of the most tumultuous moments ever in a DPC qualifier, the South American Closed Qualifier found itself locked in a three-way tie after groups had wrapped up. The trio of teams locked in this standoff were the best the region had to offer – FURIA Esports, beastcoast, and Infamous. But after one set of tiebreakers, things weren’t even close to settled. Each team won and lost the precise number of games to maintain the tie. Even after the second set of tiebreakers, nothing was wrapped up, with the standings still locked.

day 281 of infinite tiebreakers. beastcoast and @furiagg unite under one banner in the name of @RivalryDota2. here's their logo. together they believe they can defeat Infamous. the game ends with a base race and both ancients explode at the same time. the tiebreakers continue. pic.twitter.com/ssYkCfFR8o

Finally, after hours of games and three additional matches that the squads hadn’t expected to play, Infamous found themselves eliminated after dropping their final two games. FURIA and beastcoast advanced to the playoffs, to face paiN Gaming and Thunder Predator.

Who are Thunder Predator? It’s a question even close followers of South American Dota might be hard pressed to answer. The Peruvian team is built around carry Alonso “Kotarō Hayama” León, a player most famous for his run with Infamous in 2018. The stack as a whole has quietly won almost every event they’ve entered since November last year. This win in the SA qualifiers secures their ticket to top-level Dota 2.

With Thunder Predator defeating paiN Gaming and beastcoast in convincing fashion, this left FURIA and beastcoast to fight it out for the fifth time in just three days. Ultimately though, the familiarity would lead to beastcoast’s victory, sending FURIA to the minor, and ending a strange set of SA qualifiers.

It’s been rough for CIS’s top teams in the past few months. Mired in controversy over trades and deals, and underperforming on the DPC stage, both Natus Vincere and Virtus.pro will both be relieved that their trip to LA is secured.

The Bears are on the loose! Don't miss out – this will be a hell of a fight 🔥 #ESLOne #GOGOVP

It’s been impressive that they’ve staved off the hungry competition below them. CIS is a dangerous region to let your guard down. The likes of Gambit Esports, HellRaisers, etc. are hungry squads that tend to perform well whenever they’re given a chance.

Proud of our boys – @magicaldota, @FollowMag_, @Crystallize99, @9pashka and Illias.
And special thanks to @c_slayerRR for helping our team in times like these 🙏.
The next stop is LA!

That said, both VP and Na’Vi’s trips through the bracket were pretty easy going. The teams both made it handily to the playoffs. The luck of the draw meant Virtus.pro were able to avoid rivals Na’Vi, and hand the HellRaisers a ticket to the Minor. Whether both teams can step up to the level of competition at ESL One Los Angeles remains questionable.

The biggest surprise coming out of Southeast Asia has been the fall of TNC Predator. The winners of MDL Chengdu, this DPC season’s first Major, have failed to live up to the hype in subsequent events. In this tournament they fell into a tiebreaker situation to even attend the Minor with Reality Rift; a team that’s desperately been trying to claw its way into the DPC race.

Now TNC will be trying to return to a Major in one of the most stacked small events of the year. Meanwhile, Fnatic, Team Adroit, and Geek Fam are flying high. The trio of SEA teams are all headed to LA after decisive performances.

It has been a rough qualifier for us but we're still able to manage a slot to the StarLadder ImbaTV Dota 2 Minor Season 3 Southeast Asia Qualifiers.

In case you missed out the games, here's our Day 2 and Tiebreaker game highlights on #ESL One Los Angeles SEA Closed Qualifiers. pic.twitter.com/bAV0a6eGy2

Geek Fam have very much evolved into the kind of team that their experience suggests they should be. A staple of the DPC this season, they’ve caused many problems for more storied opponents, especially at minor events. Team Adroit is in a similar boat. Although the team is only a year old, they’ve become a familiar sight in the SEA qualifier scene. ESL One Los Angeles This is set to be their first Major appearance, and it will be fascinating to see how they do.

North American Dota is still a one-horse race. Evil Geniuses, fresh off a second-place finish at DreamLeague Season 13, breezed through the competition to earn a trip back to the Major. Meanwhile, the second tier of the region was left to fight it out for the scraps.

Nothing says "We're awake now" like a 30-3 victory to tie the series.

We're now just one win away from securing an invite to #ESLOne LA. #LIVEEVIL

With just two spots open for NA, the likes of the Fighting PandaS, a returning TEAM TEAM, Chaos EC, and the former J.Storm roster of “business associates” were left to duke it out. TEAM TEAM, unfortunately, fell in groups and the Fighting PandaS will not make it to another Minor just yet.

Chaos EC and the former J.Storm team clashed in the lower bracket. Chaos seemed to have the upper hand, having both defeated business associates before this tournament, and even taking a game of EG. Ultimately, Chaos EC would be victorious, sending business associates to join the PandaS, Team Xolotl, and Zoomies in the StarLadder ImbaTV Minor qualifiers.

CONGRATULATIONS @ChaosEC you are heading to the #ESLOne LA Major! A great performance sees them join Evil Geniuses as the NA qualified teams.

Commiserations to Business Associates, they came close but fell just short.
Overall, such a fun Qualifier, good games all round! pic.twitter.com/7YZn1QST4j

NA is very much a region where EG is king, and everyone else is a pauper. Although Chaos EC have made it to the ESL One Los Angeles, this NA squad will have to step up their game by a substantial margin to advance in the tournament.

After a dominant display in groups, and a further showing of proficiency in playoffs, Invictus Gaming claimed the first qualifying spot for ESL One Los Angeles. The team remains one of the strongest stacks in China, and with principle rivals Vici Gaming absent from this tournament, iG is set to surge. Their roster has remained remarkably consistent since the start of the season, and what’s followed is victory after victory.

Joining them at the top are Royal Never Give Up. This qualifier has been RNG’s best performance in the DPC 2019-2020 to date. After an impressive but ultimately fruitless trip to the WePlay! Bukovel Minor, RNG have leveled up in both drafting ability and raw talent. No better was this displayed than in their 2-0 sweep of EHOME in the semifinals. Although pushed in two hard-fought and long games, RNG’s perseverance and map rotations were what won them the day, in the face of very fed carries on the opposing team.

After a 2-0 victory over Team Aster, our DOTA2 team finally qualifies for the #ESLOne Los Angeles Major!
See you in Los Angeles!
GGWP, and thanks to our sponsors and fans. Onward and upward! pic.twitter.com/K6IV3iuJn9

Finally, taking up China’s third spot at ESL One Los Angeles is the aforementioned EHOME. Although dropping to RNG in the semis, EHOME took out Team Aster to secure their ticket. This will be the first DPC appearance for the squad since MDL Chengdu Major, where the team disappointed with a quick departure on home soil. Despite this, EHOME remains a formidable opponent. But they’ll have to learn to close out games a little quicker if they hope to progress in this upcoming Major.

One notable absence from this list was PSG.LGD, who’ve struggled this season. After sitting out the first Major, like many top teams, the squad missed out on the second DPC event of the year and spent the latter half of 2019 focusing on regional competitions and creating a strong roster. In their not-so-triumphant return to DPC competition, LGD made it further than their previous attempt, although not by much. The team still failed to make it out of the best-of-one initial bracket of the Open Qualifier, falling to eventual Closed Qualifier competitor Blaze.

In a qualifier cycle so filled with turmoil, it’s only natural debate has sprung up around tournament format and invite numbers. In Europe especially, where there are just so many competitive teams compared to other regions. In others, realistically, only a single stack has a real chance of victory at a Major. So it seems unfair that Europe only gets three spots, or four if a team navigates the Minor as Nigma did for the DreamLeague Season 13 Major.

With that, we now know all our teams for ESL One Los Angeles 2020; apart from the winner of the upcoming Minor. StarLadder ImbaTV Dota 2 Minor Season 3 kicks off from March 5th in Kyiv, Ukraine, and we’ll know our full lineup for LA by the close of play on March 8th. Tune in to all the action on StarLadder’s official series of Twitch channels.