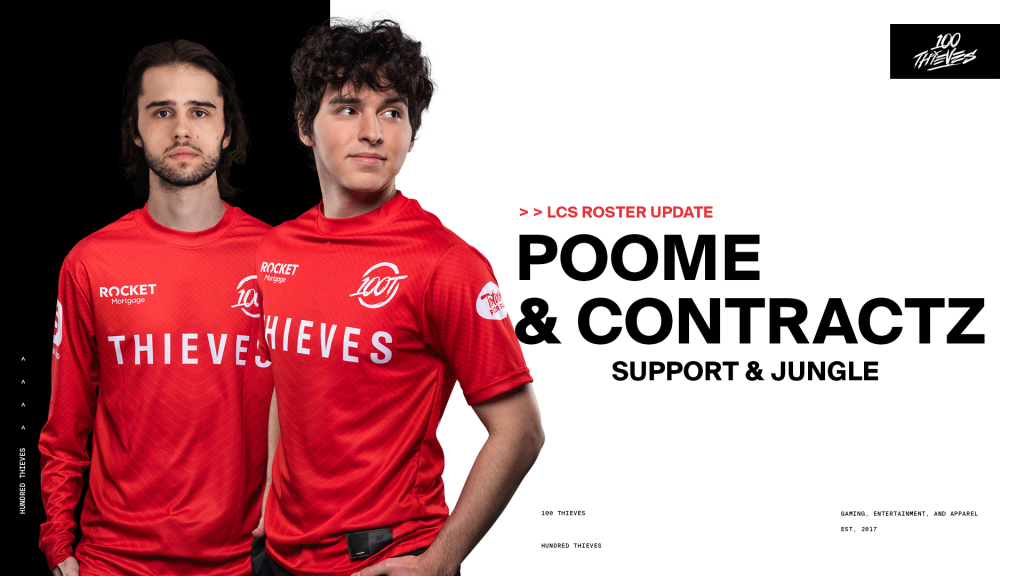 poome and Contractz will start for 100T’s main roster in Week Four of the LCS Summer Split. (Photo courtesy 100 Thieves)

100 Thieves has announced they are benching William “Meteos” Hartman and William “Stunt” Chen from the starting roster. The organization will promote Juan “Contractz” Arturo Garcia and Philippe “poome” Lavoie-Giguere ahead of their games against Golden Guardians and Dignitas on July 3rd and 4th, respectively.

Next week for LCS, @poomelol and @Contractz will be our starting Support and Jungle, respectively. We’ll share a video tomorrow from @PapaSmithy regarding these roster changes. pic.twitter.com/0CJc45V6mW

100 Thieves had yet another miserable week in the LCS Summer Split. The roster lost to CLG and TSM in Week Three and these two defeats come after their only win against Immortals the week before. With the week concluding, 100 Thieves sit on a 1-5 win-loss record, tieing with Immortals for 8th place.

These changes offer Contractz another chance at the LCS mainstage. Contractz has previous LCS experience, having competed on Golden Guardians in 2019, but has since moved to 100T Academy roster after a poor 2019 season. As for poome, this is his first time stepping up to a main LCS roster.

These moves come at a crucial scheduling point for the roster. Their next games are against Golden Guardians and Dignitas. Golden Guardians are currently 2-4 in the standings, sitting in 7th place, while Dignitas are 0-6 in 10th. 100 Thieves need a 2-0 week to continue their hope for a playoff spot. Both teams are their close competitors for the 6th playoff spot available. There is no doubt these roster changes are an essential part of keeping their playoff dreams alive.

You can catch the newly shaped 100T roster compete against Golden Guardians on Friday, July 4th at 6 pm PST. Will the new line-up find hope in a crucial battle for the season? Catch their match to find out.