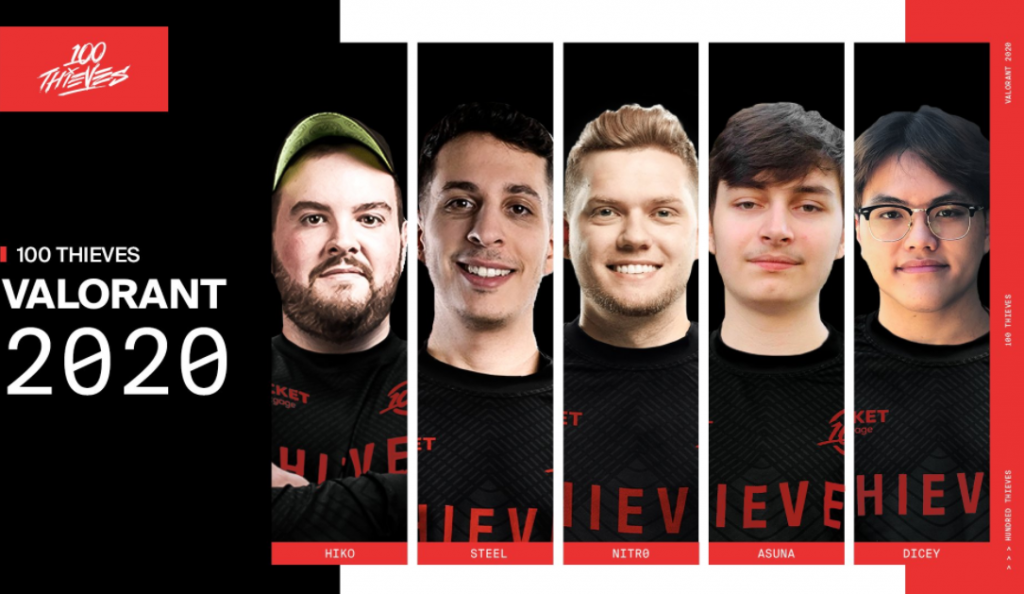 100 Thieves revealed on Friday that they have signed Peter “Asuna” Mazuryk and Quan “dicey” Tran to fill the final two remaining slots of their VALORANT roster. Before joining 100 Thieves, Asuna and Dicey were competing together for the Immortal’s VALORANT team.

With that, we have rounded out our competitive VALORANT roster:@Hiko@JoshNissan@nitr0@Asunaa@diceyzx

After failing to find the results they were hoping for at tournaments throughout the summer, 100 Thieves decided to take their VALORANT roster back to the drawing board in August. On August 14th, they cut four of their players, keeping only their team captain, legendary former CS:GO player Spencer “Hiko” Martin. On the same day they cut those four members, the team announced that they had recruited Nicholas “Nitro0” Canella to the team. In September, they  picked up Joshua “steel” Nissan to be their third member. WIth Friday’s signings of Asuna and Dicey, 100 Thieves finally has a complete VALORANT team again.

Asuna is a 17-year-old former CS:GO pro who made the jump to VALORANT in April, playing in a few different C-Tier events. The young phenom found success playing with the unsigned VALORANT team Prospects in May, which put him on the VALORANT competitive map.  He was eventually recruited to join Immortal’s inaugural VALORANT lineup, where he played for four months before leaving on Friday to join 100 Thieves.

Dicey is also a seventeen year old former CS:GO pro, who has an oddly similar story to Asuna. The prodigy first gained notoriety in the VALORANT scene while also playing for Prospects, though he joined the team after Asuna had already left. Dicey then joined Asuna on the Immortal’s VALORANT team on August 12th, replacing Joseph “Bjor” Bjorklund who was cut from the squad that same day. While playing with Immortals, Asuna and Dicey helped them place third place at the T1 x Nerd Street Gamers Showdown in June and place third again at the FaZe Clan Invitational in August.