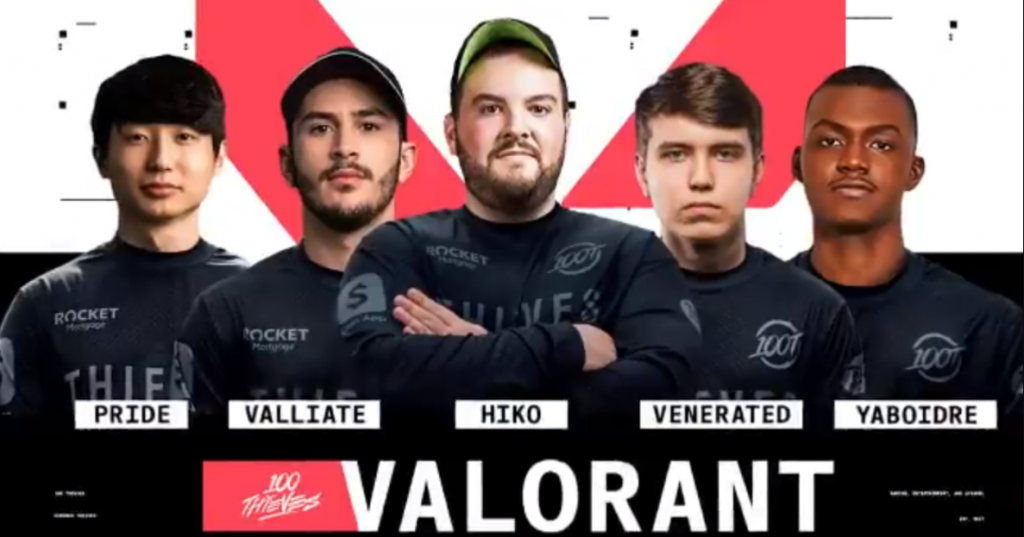 The new squad is made up of one former CS:GO pro and four former PUBG players. (Photo courtesy 100Thieves)

100 Thieves officially revealed the full roster for their first ever professional VALORANT team on Thursday. Earlier in June, 100 Thieves announced that they would be entering VALORANT and had signed Spencer “Hiko” Martin to be the captain of their new team. After Thursday’s announcement, 100 Thieves is officially ready to compete in Riot’s new esport.

With the exception of Hiko, all of the newly named members of the 100 Thieves squad are former professional Player Unknown Battlegrounds players, who switched to VALORANT during the beta. Valliate, YaBoiDre, Pride, and Venerated were all playing together on the Highground VALORANT team over the past few months before being signed by 100 Thieves on Thursday.

Hiko is a former Counter-Strike: Global Offensive player with well over a decade of experience playing tactical shooters at a professional level. He formerly played CS:GO for Cloud9, Team Liquid, and Complexity Gaming, among others. Due to his many years of experience in esports and in depth knowledge of round based tactical shooters, Hiko is the perfect candidate for team captain.

Welcome! Excited to get on the grind again 😀 https://t.co/7xl1ncbMHZ

Valliate is best known as a former PUBG player for teams including Optic Gaming, Tempo Storm, and most recently Spacestation. He also represented the United States in the PUBG Nations Cup in 2019. Valliate has been playing with the Highground VALORANT team since April, however he only officially announced his retirement from PUBG on Thursday during the lead up to the 100 Thieves announcement.

I am officially retiring from @PUBG. This game has changed my life in so many ways that no one could imagine. Although the game had its ups and downs in the end I am grateful in having the opportunity to compete in it. I have memories I will cherish forever. Thank you everyone!

Venerated also comes from the PUBG scene. He played for Team Envy from 2018 through the beginning of 2020. While playing with Team Envy, Venerated helped win the National PUBG League-Royale: Phase 2 major tournament in 2019, among other notable victories and high placements.

YaBoiDre is a former PUBG player who played for Tempo Storm from 2017 to 2019. YaBoiDre and his teammates saw tremendous success in PUBG tournament play, winning five different major and premiere events from July of 2018 to June of 2019. While playing with Tempo Storm, he was briefly teammates with Valliate before Valliate left Tempo Storm to join Optic Gaming in 2018. Valliate and YaBoiDre were reunited in April while playing with Highground.

Pride, like his other teammates from Highground, has a background in professional PUBG competition. Throughout his career he has played for a number of PUBG teams, including Wildcard Gaming and most recently Team Envy. After switching to VALORANT in April, he initially joined Plainslope before moving over to the Highground roster in May.

100 Thieves new roster will make their competitive debut on Friday, June 26th at the North American T1 x Nerd Street Gamers VALORANT Showdown. That event will feature 16 teams vying for a $50,000 prize pool. Cloud 9, T1, Gen.G, the Sentinels, and 100 Thieves are all expected to participate in the tournament.