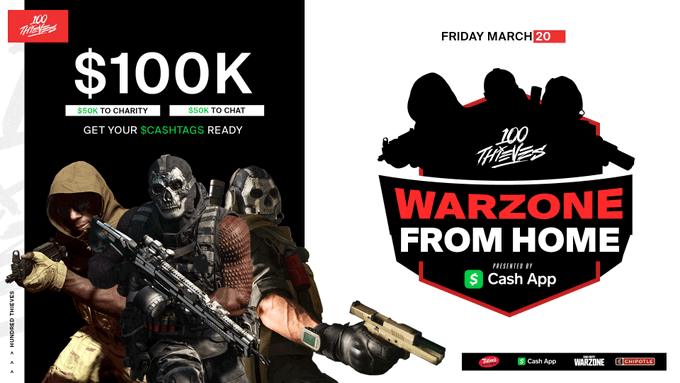 Fans will enjoy an intense competition that will help combat the COVID-19 virus. (Photo courtesy 100 Thieves)

Tag the creators and pros you want to see battling it out this Friday. pic.twitter.com/DYz6443wcC

The COVID-19 virus has devastated the gaming industry. Almost every major esports league has been canceled, postponed, or moved to an online format. The absence of major events has made esports organizations get creative to provide a new source of entertainment for fans.

The 100 Thieves Warzone From Home tournament will help fill the absence of regular scheduled events and matches and will feature huge names from the esports world. 100 Thieves features popular streamers such as Nadeshot, CourageJD, Brookeab, and Valkyrae. Other major names such as Dr. Lupo and NoahJ456 have also responded to the tweet, so fans will likely see some of their favorite streamers go head to head.

100 Thieves has also featured other celebrities in their content before, such as Karl-Anthony Towns who is a professional player in the NBA. The NBA and other major sports leagues have been canceled due the coronavirus, so fans might see some interesting competitors in the tournament.

Call of Duty: Warzone has been one of the most streamed games since its release and has introduced several new mechanics to the battle royale genre. Fans of the game will have an exciting tournament to entertain them during this tough time.