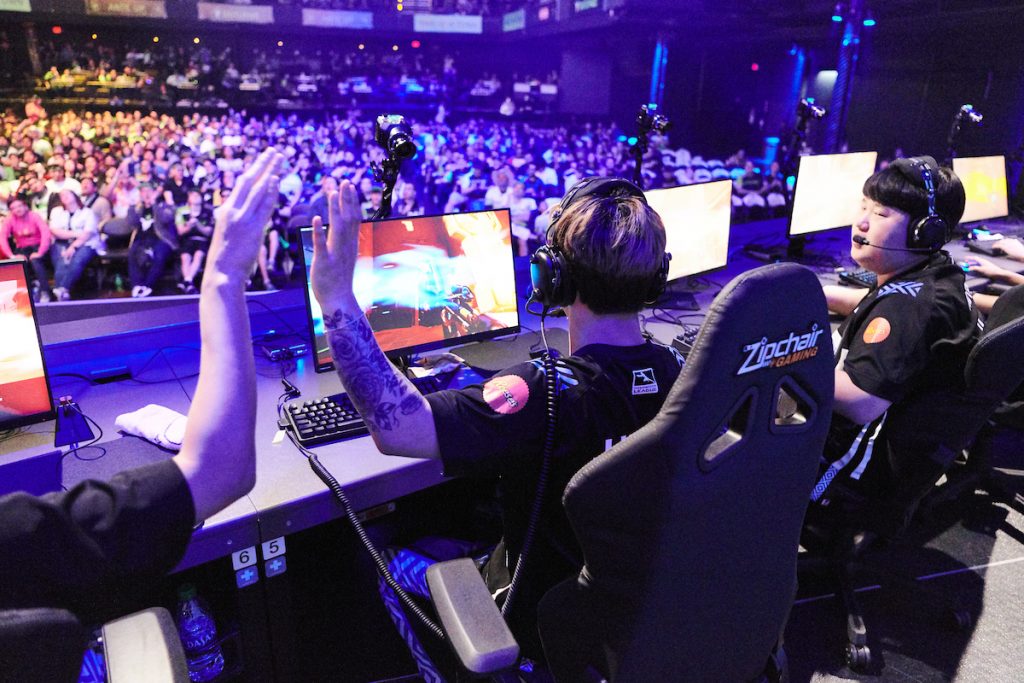 Although the 2020 season was definitely rough around the edges, it still brought some impressive and memorable moments that are worth celebrating. (Photo courtesy Ben Pursell - Blizzard)

The Overwatch League in 2020 was a bit rocky. Between cancelling most of the homestands, to massive player retirements, to instituting major changes like the Hero Pools system, there was a lot going on throughout the season. In the midst of all that chaos though, there were some truly awesome moments. Players pulled off insane clutches, dark horse teams advanced over super powers, and the first OWL dynasty was born. Despite its flaws, season 3 was special and highly entertaining!

We put together a list of some of the most exhilarating Overwatch League moments that took place this year, to help you reminisce about OWL Season 3!

After dominating their region in the first half of the year, most fans expected Shanghai to come out on top at the APAC May Melee regional tournament. So to no one’s surprise, the team reached the Grand Finals of the event where they faced off against Seoul Dynasty. However, the final match ended up being far closer than expected. In fact, Shanghai lost the first three maps to Seoul, leaving their ability to win in doubt throughout the second half of the match. They had to win four maps in a row to pull off a reverse sweep.

Shanghai started clawing their way back into this game, picking up two maps after halftime. In the sixth map, as Seoul drew close to capturing the final point on Kings Row, Byung-sun “Fleta” Kim switched to Widowmaker in a last, desperate attempt to turn the tides of the losing teamfight. What Fleta did next demonstrated very clearly why he won the 2020 MVP award. He secured four headshot kills in a row, at a desperate hour, allowing his team to win the penultimate map. This moment will be remembered as one of the most impressive plays of the 2020 season by one of the most impressive stars of the 2020 season.

Coming into the NA Summer Showdown, very few predicted that Paris would be the team to beat. However, a Genji centric meta suited the team well, and they eventually won the entire tournament despite entering the bracket as the eighth seed. Along the way the team won a very close 3-2 series against Shock in semifinals.

On the final point of the final map, Shock were in the lead 85% – 0%. Eternal managed to flip the point, but San Francisco only had to win one teamfight and had plenty of time to do it. Paris were able to hold the point until final fight territory. In the final fight, Shock picked up the first kill and things weren’t looking good for a moment, but once Paris’ rookie DPS player Yeong-han “SP9RK1E” Kim pulled out his Genji blade it was all over. He swiftly secured four kills with his ultimate ability, handing Shock a very rare upset loss, and advancing Eternal to the Grand Finals of the Summer Showdown. SP9RK1E’s incredible play to upset San Francisco will be remembered by OWL fans for a long time to come.

Perhaps the single most impressive play of the year took place during the finals of the NA Summer Showdown, but the play came from Philadelphia, the losing team. On the final map of the series, tied up 3-3, both Fusion and Eternal were in position to secure their first ever Overwatch League title by winning the final payload map. During their offensive round, as the clock ticked down for Fusion, they had to win a teamfight and secure the first point to keep their chances of victory alive. In the final push, Eternal confirmed kills on five Fusion players. In most situations, that would have been the end of the match right there, but Josh “Eqo” Corona had other plans in mind.

EQO earned his blade just as the Overtime started. Without leaving the cart, he used his ultimate ability and slashed down five enemy players as Genji, by himself, keeping Fusion in the match. The play is one of the most insane clutches to ever happen in the Overwatch League over the past three years. Although Fusion ended up losing that match, EQO’s incredible clutch was the highlight of the series.

Pokpo kills four with a firestrike

On the very first map of their first match of the 2020 season, Atlanta Reign landed one of the craziest combos ever seen in the Overwatch League. Although the play didn’t happen in a tournament with large stakes on the line, the combo from Hyun-jun “Pokpo” Park,Dusttin “Dogman” Bowerman, and Blake “Gator” Scott stands out as one of the coolest teamplays in 2020.

The maneuver started with Pokpo launching the Firestrike across the point toward the corner the enemy team was hiding behind. Dogman then placed his Amplification Matrix down at the exact right moment to magnify the Firestrike’s damage. Finally, Gator launched Orisa’s Halt ability to pull the enemy team out from behind the corner, where they could face the full wrath of the amplified Firestrike, which subsequently obliterated four enemy players. This play was clearly well practiced and they executed it to perfection in game.

During the first match of the year for both Dallas Fuel and Los Angeles Valiant, Caleb “McGravy” McGarvey started off his 2020 season with a bang. After his team trapped Dallas Fuel in a corner on Blizzard World, McGravy dropped his D.Va Self-Destruct. Just as Fuel’s Reinhardt shield cracked, the bomb went off, wiping the entire Dallas team in a single decisive explosion.

The dream of every D.Va main is to one day land the white whale of D.Va accomplishments: a sextuple-kill D.Va bomb. It is nearly impossible in low level ladder games, much less against a team of professionals. A lot of players have pulled off incredible D.Va bombs during OWL matches, but McGravy became the first to land a full team wipe in the kill feed with D.Va’s ultimate in an official Overwatch League match.

In week 2, Philadelphia debuted against the Washington Justice. On the first map, Justice had control of the final point as the clock ticked down. As overtime approached, Jae-hyeok “Carpe” Lee switched over to his signature hero Widowmaker from McCree in a desperate attempt to recover the round. After losing multiple teammates in the final fight, the DPS player was unphased and proceeded to execute four enemy players, turning the tide of the map in Fusion’s favor. This moment was exhilarating to watch and was perhaps the most exciting individual play in the Overwatch League all year.

Carpe has been nicknamed the king of Clutch, and for good reason. Perhaps no other player is as capable of turning around a teamfight as Carpe. So long as he is alive, his team is still in the fight and this play was proof of that.

During this clip, Carpe put on a world class performance as Torbjorn, including hiding behind his turret to survive, getting a turret kill, and clutching out a key teamfight fight with five eliminations. The actual gameplay in this moment wasn’t as impressive as other moments on this list, however it is notable for other reasons. In this clip, Carpe became the first OWL player to ever reach 4,000 killing blows. That achievement cemented his legacy as one of the greatest founding members of the Overwatch League.

This moment is also notable because Carpe accomplished his huge 4000 final blow milestone while playing Torbjorn, a hero who is more of a joke than an actual viable option in most situations. It turns out that in the hands of a S-tier DPS player like Carpe, Torbjorn can do some serious damage. During the 2020 season, the Overwatch League instituted a new Hero Pool system which rotated out new heroes every week. In week 9, the meta happened to be Torbjorn friendly since Mei and McCree were both banned that week. As a result, Carpe accomplished a huge milestone in his competitive career while playing the eccentric Swedish engineer.

During the losers bracket finals at the OWL Grand Finals Weekend, the match between Shanghai and Seoul ended up going to the final map. On the final map, with only a single teamfight between them and the grand finals, Seoul won the final crucial fight due in no small part to the heroics of Jae-hee “Gesture” Hong on Roadhog. Gesture started the play by landing a key hook and solo kill on Jun-woo “Void” Kang. After that, he received the Nano Boost from Young-wan “Creative” Kim and pulled out his Whole Hog ultimate ability, annihilating two more Dragons players to earn Seoul’s spot in the Grand Finals.

After a difficult year playing fourth fiddle in the APAC region, Dynasty ascended from the ashes like a phoenix in the playoffs. They invented a composition built around an unorthodox Roadhog and Sigma tankline. The strategy, which has been dubbed as the Seoul Special by some, relied upon highly technical and aggressive Roadhog plays. Gesture filled that role to perfection throughout the playoffs, becoming the foundation of his team’s epic run to the championship match.

After nearly 10 months of intense Overwatch competition, two North American regional title wins, and a flawless run through the playoffs, San Francisco Shock secured their second championship in a row at the Overwatch League Grand Finals Weekend in October. The year’s victory moment wasn’t as climactic or highly produced as last year’s victory moment, which occurred on stage in front of thousands of cheering fans, but it was still a powerful and emotional moment to witness.

We can't stop watching this… 😭

This victory was huge for San Francisco, especially for those members who played with the team in 2019 as well. Shock are now an esports dynasty, with two championships under their belt and no signs of stopping anytime soon.

Rounding off our list of incredible OWL moments from 2020, we have Nori the cat banning Mei from the hero rotation in week 9. During the 2020 season, the Overwatch League moved online in response to the global pandemic and shutdown orders. As a result, the broadcast staff were forced to commentate OWL games from their homes. And of course, their homes are where the OWL broadcast talent keep their cats, who ended up making a number of appearances on live OWL streams throughout the season.

After several weeks of cats providing unplanned interruptions to broadcasts, the production team decided they would use Soe’s cat Nori to select the banned heroes for week 9. Soe laid out all the DPS options face down on the floor and waited for Nori to peruse one. Everyone waited in breathless anticipation hoping he would ban Mei, a hero who dominated the first eight weeks of the season. All rejoiced when the cat selected Mei to be banned! Audience and casters alike were ready for a meta change and Nori ushered in that change when we needed it most.